The design team at Ganim’s Florals seeks to always make your special event beautiful and stress free. Whether it is a wedding, birthday, baby shower, bar or bat mitzvah, or just a thinking-of-you arrangement, we put care and detail into every bloom and bud.

We want you to have something extraordinary – just tell us a little bit about what you are looking for and we can take care of the rest. We work in a variety of materials, flowers, and greenery, so we can always find the perfect palette.

We Live to Impress

Our floral designers are ready to create a masterpiece exclusively for your unique style. The beauty of flowers lies in their nature – delicate or hardy, colorful or understated, simple or voluminous. No matter your event venue, Ganim’s Florist can work with you to achieve the perfect fit.

If you need just a few bouquets for an anniversary party, or a full arbor and table decorations for an outdoor wedding, we can handle it all.

Ganim’s Florist has been a family owned garden center and florist since 1938, when John Ganim opened a simple fruit stand. Over 30 years he added seasonal flowers, fruits, and Christmas trees. Since then, Ganim’s has grown and expanded, offering high quality garden products and full-service floral design. Still operated by the Ganim family, Merrilee Ganim is the creative mind behind Ganim’s Florist. 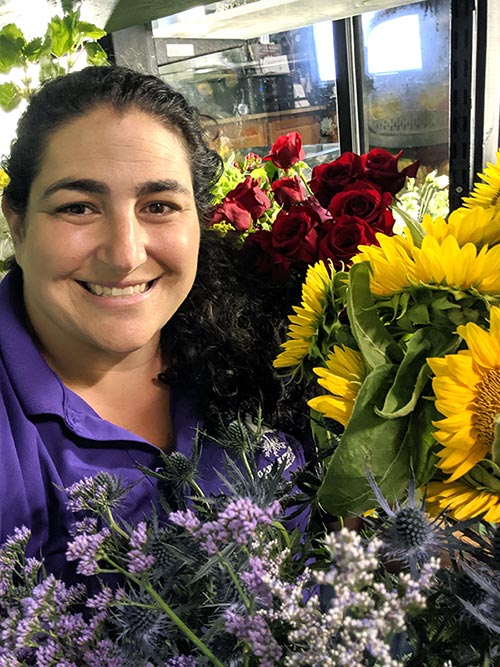 Merrilee graduated from CCSU in May of 2003 with a degree in Business. She can be seen at the store daily as the Floral Department manager and designer. She also helps run the Garden Center. Merrilee is a graduate from the CFA Floral school.

My bouquet was perfect. Merrilee listened to what I wanted and created something so much more. Thank you!!
- Abigail
Merrilee and her team at Ganims LITERALLY nailed it for our wedding. Their arrangements and bouquets were the talk of our guests. I gave very little direction for what I wanted and every centerpiece, bouquet and the arbor flowers had their own unique look and feel that were PERFECT for the venue...Merrilee made flowers one of my favorite processes for the wedding and I would recommend her to any and all of my friends for the future.
- Casey
Merilee from Ganim’s did our flowers for our August 3rd wedding and I can’t say enough good things about her! She was so personable, She understood my vision within a few minutes of meeting me, and she was willing to work within our budget every step of the way. She even gave me a few ideas of how to save additional money because she knew I really wanted to use her! There was a few revisions to our our original quote and plan and she was flexible and responsive. Then the day of, the flowers arrived and I was stunned. The bouquets were beautiful but our centerpieces stole the show! Everyone was talking about them. We mixed high and low centerpieces and they completely flowed. We had cake flowers and I am still looking at those pictures of how amazing they were. Same with the small touches all over the venue, Merilee just got it! I would recommend her to anyone. Thank you again Merilee 🙂
- Elizabeth
Merrilee and her team did an amazing job with my wedding flowers! From our first meeting, Merrilee was extremely easy to work with and understood exactly what I was looking for. She was super responsive throughout the entire process via email and was great at suggesting ideas/designs that fit my vision. On the day of, everything was perfect and even better than I had envisioned. I highly recommend Ganim's, you won't be disappointed!
- Mo W.
Merrilee at Ganim's florist made the boutonnieres, corsages, bridal and mother's bouquets for our wedding. We gave her a general idea of what we wanted with photos from Pinterest, trusting her judgement. Everything came out beautifully...We would definitely consider hiring her again for any future occasion.
- Tanghui
I have never been so happy with a vendor before in my life. My wedding was...at Burr Mansion and the flowers were stunning and at an amazing price!! I am still waiting on my photos from my photographer but I will post them on Ganim's Florist's Facebook so everyone can see just how beautiful they really were. Merrilee was on her maternity leave when I originally reached out and she literally let me know that she is in the hospital and just had a baby but she will get back to me tomorrow. She continued this AMAZING customer service throughout the entire year and turned my vision into reality without me being able to really explain it. I will recommend Ganim's too every single person I know getting married!!! You must use them!!!!! You will be so thankful you did!
- Olivia
I went to Ganim's with a picture of the bouquet that I wanted. They did an amazing job selecting the flowers to create it. They did a great job with all the bridal party flowers.
- Suzette
Working with Merrilee at Ganim's was a dream. We knew we wanted all greenery but didn't know much more about florals. She knew exactly what we were looking for and took it to the next level. All while working within our budget. I didn't get the chance to meet the team the day of but if they're reading this, you guys killed it! Thank you so much!
- Nicole
More Reviews on The Knot

A beautiful fall day for a wedding at Heritage Hot

Wedding preview for this weekend!

Hello Fall! This beauty went to a customer to ce

Just a little something for a client hosting a sma

Congratulations to our Bride and Groom today.... L

Congratulations to EiEi and Ryan! Their wedding a

A beautiful day for our Bride and Groom's send off